From January 2018 Helen Mitchell has taken over the Convenorship of Ninian’s gardeners. After several years of heading up the Gardener’s group Maggie Moore has passed on the baton and we are all very grateful for all the hard work put in by Maggie and her team.

St Ninian’s has always had a garden and it was originally somewhat larger than it is now.  Originally there was just the church and a wooden structure which was the priest’s living accommodation.  In those days there was space for a grass tennis court and ample space for a Garden Party. When the new church was built in 1952 this reduced the size  of the garden and this was further reduced in 2000 when the site of the old church was sold to a developer for the construction of flats and our new hall was also built as part of the arrangement. We have always been fortunate to have members of the congregation who have tended the garden and their efforts are much appreciated by the local community who make use of the garden - mainly in the summer months!  Currently the garden team is under the leadership of Maggie Moore who brings the story up to date:

St. Ninian's Church has a garden that extends to one side, also  back and front of the building.
The land to the boundary with the Royal Mail rises in height to the rear, and is planted with trees and shrubs.
The back garden comprises of two lawns, a larger one surrounded by a planted border and a smaller one part of a Memorial Garden.
The front garden comprises of two lawns with a Peace Garden on the lower level. It is this area which is used by the local community.

The plentiful rain has made the plants grow and flower in abundance this summer. 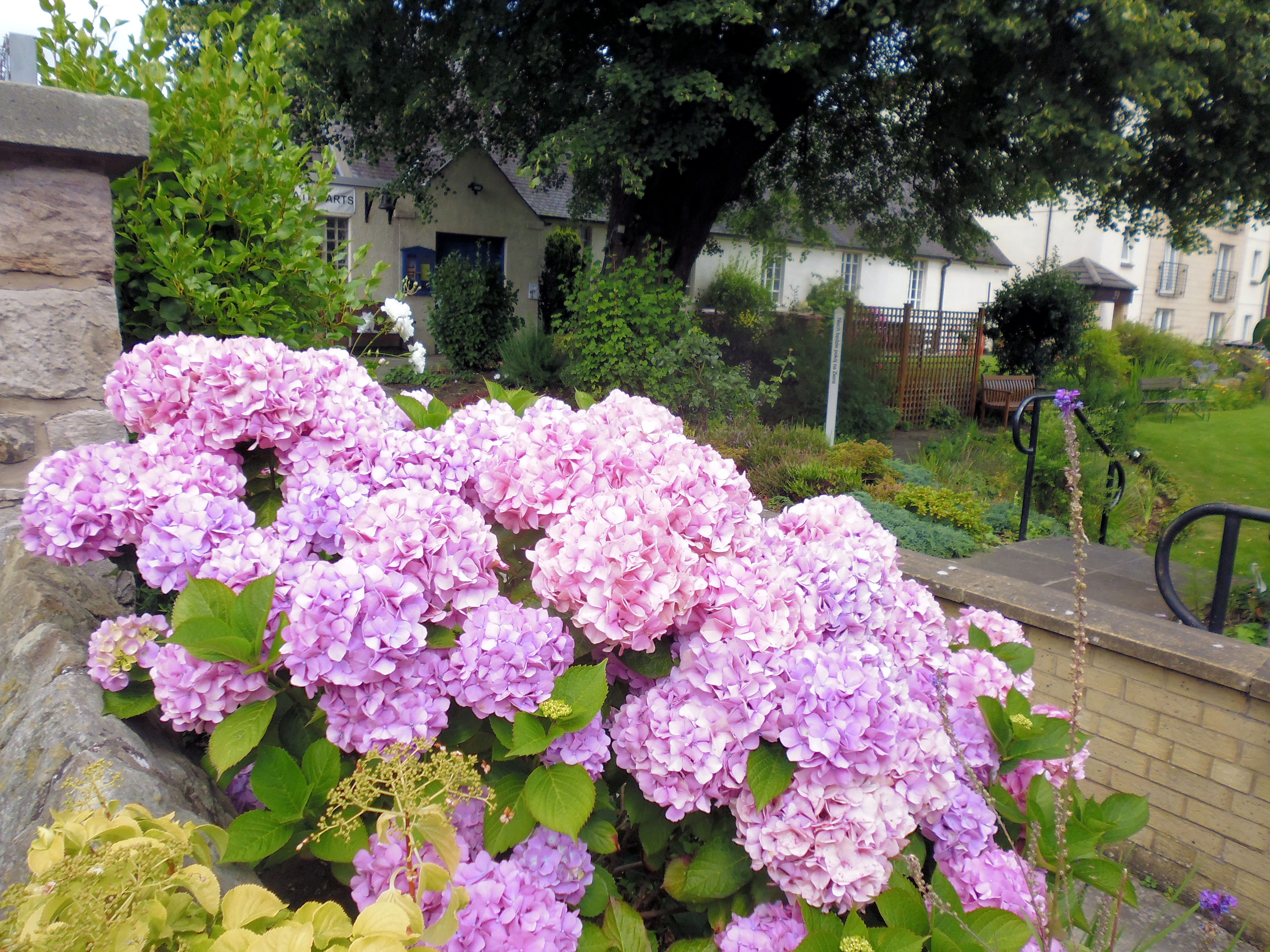 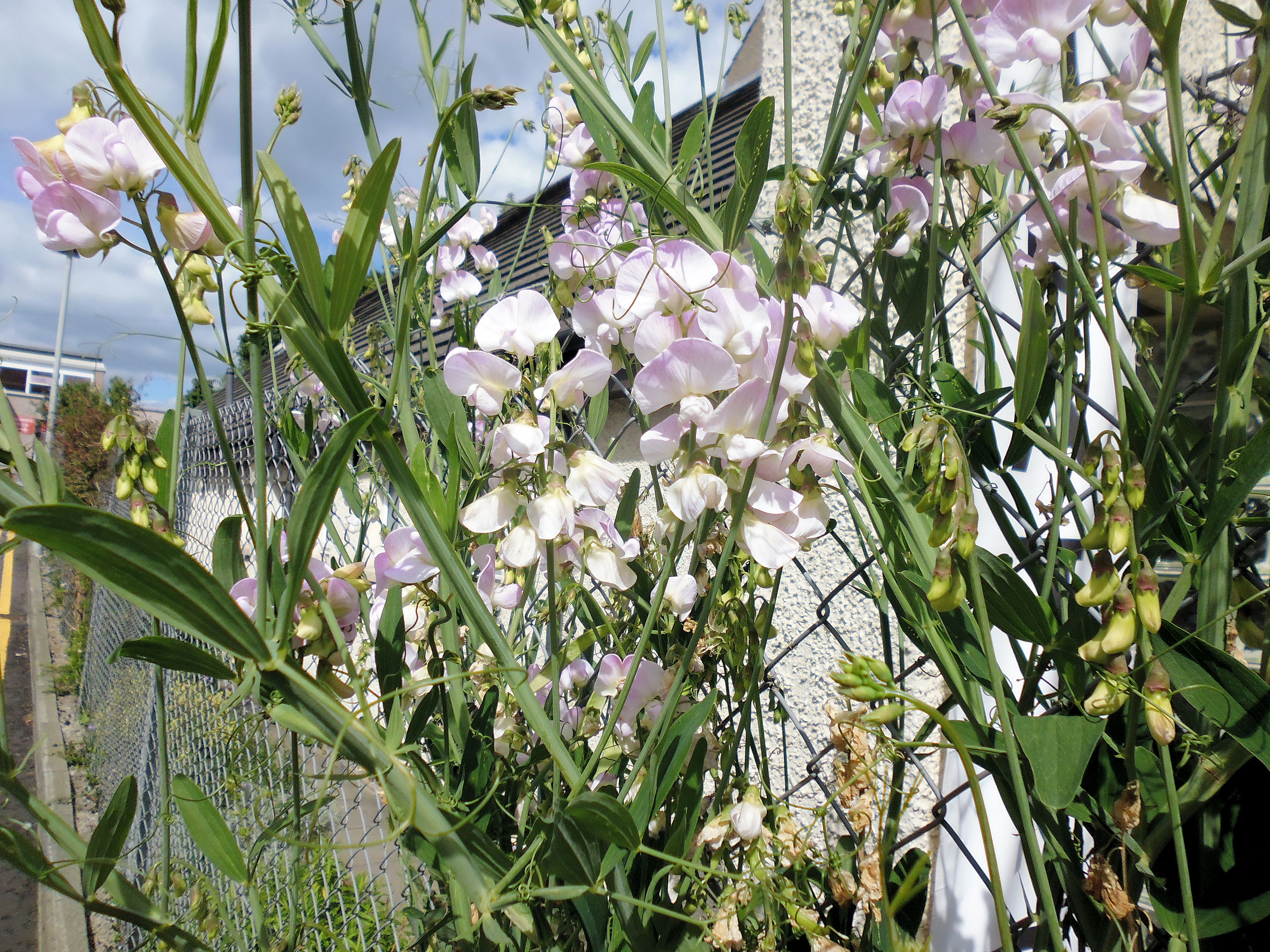 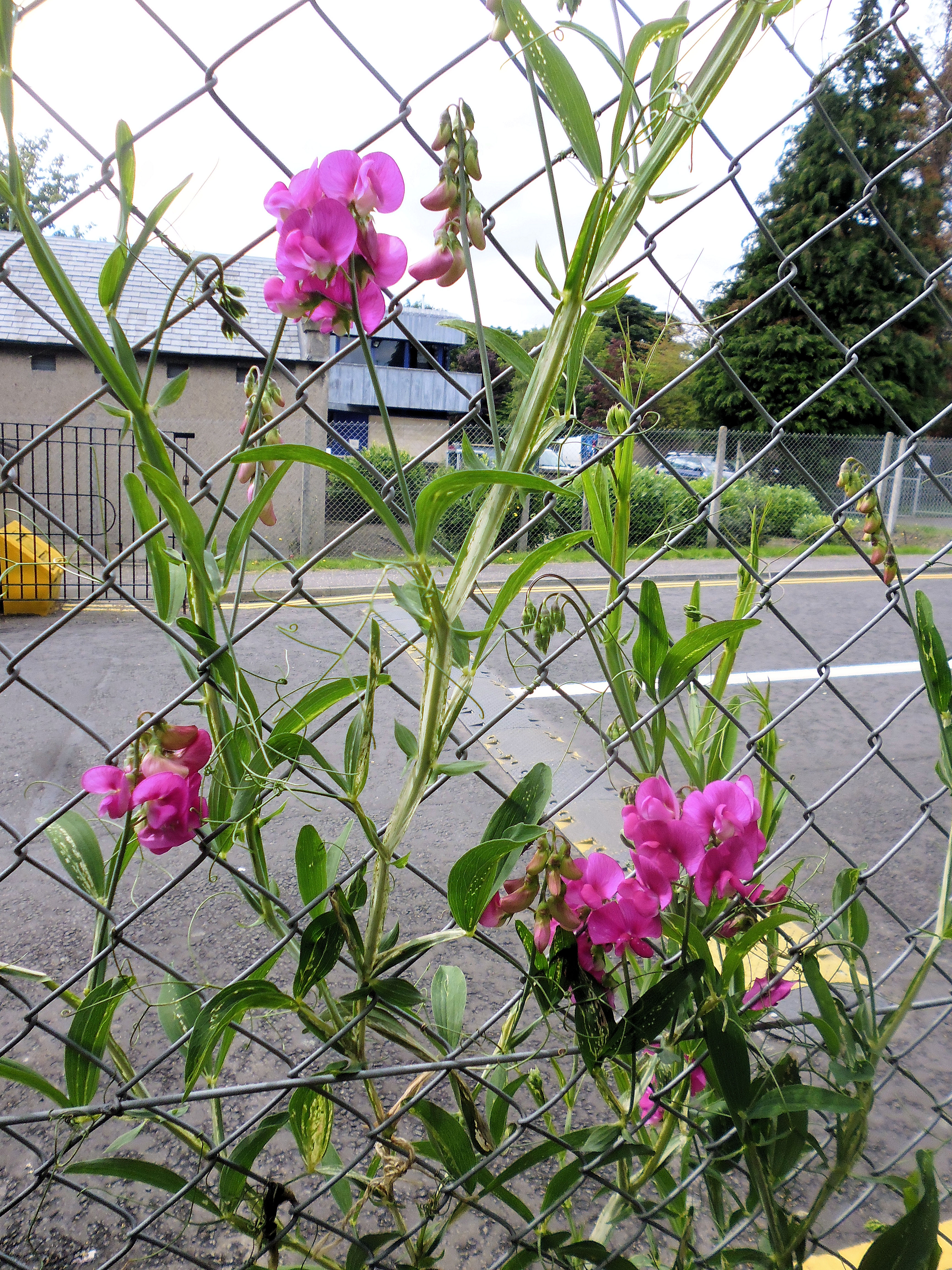 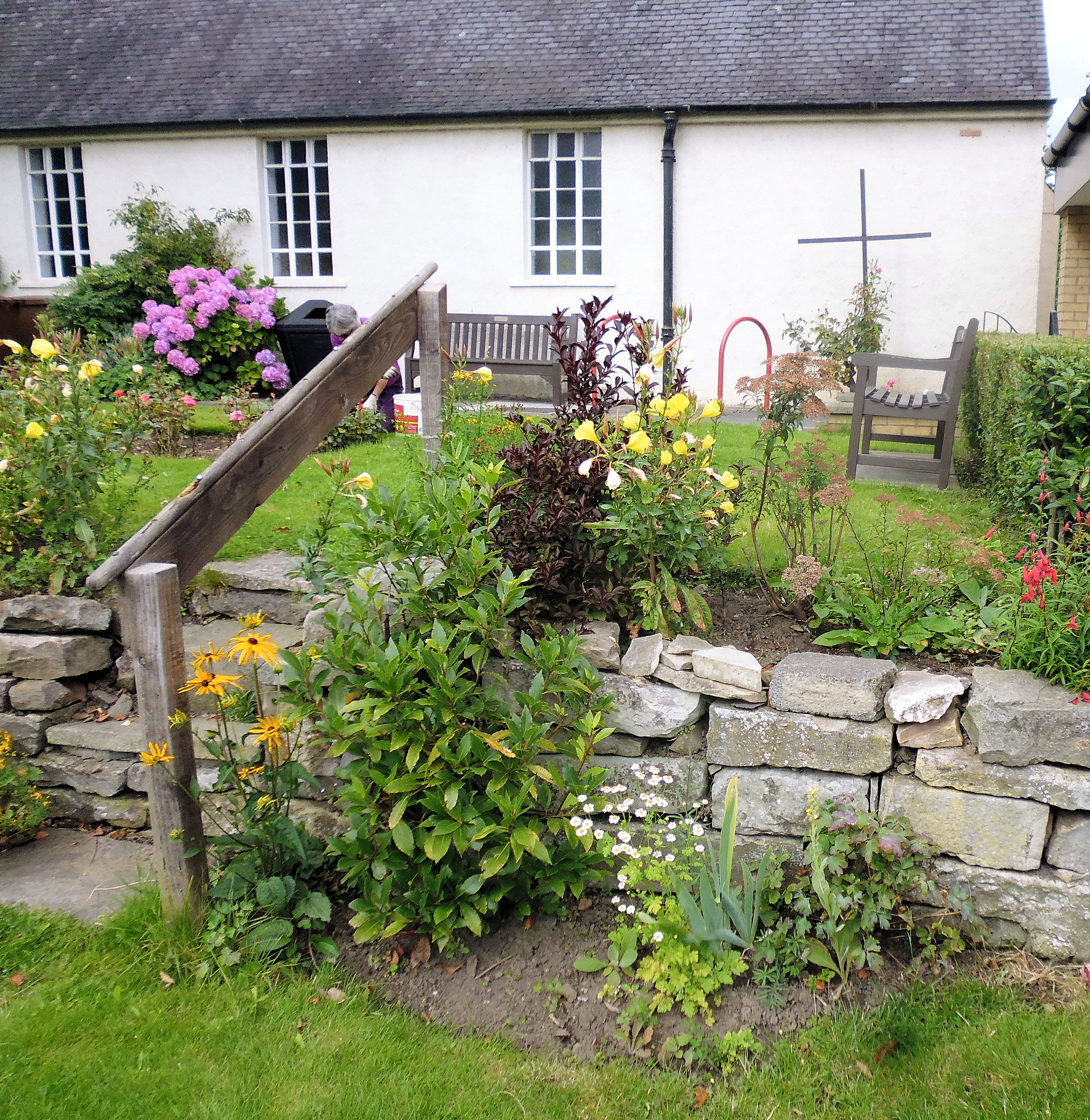 The hydrangeas have once again made a fine display. It has taken three years for the sweet peas to reach maturity before flowering. The pale pink and dark pink sweet peas were grown from seed pods given to us by friends

A large rosa rugosa bush was removed from the flower bed near the privet  hedge. We grew privet cuttings to grow on, then plant to extend the  hedge along the wall. The privet has grown much more than usual this  summer, by autumn the new plants will merge well with the older hedge.

This season has been particularly dry, we have used the hosepipe weekly. The prospect of showers soon is most welcome. 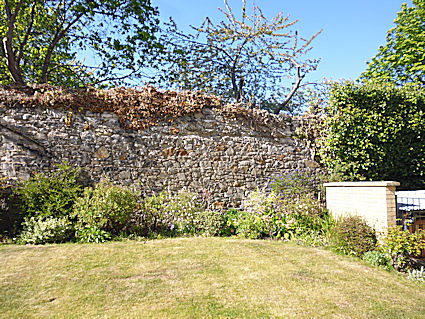 We have a couple of difficult areas at our boundary fence and wall.

At the back the wall that joins the Police grounds, ivy has grown into the  lime mortar between the stones.
After several attempts ivy is now much  reduced on top of the wall top. 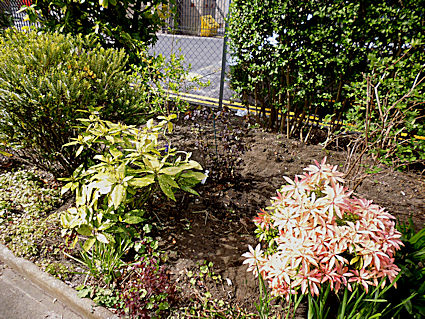 The  privet hedge in the front garden has been choked by ivy, reducing new  growth especially at the base.

We have removed large pieces of ivy with  thick stems and growing to a metre high, hoping the privet grows better  now.

Near the hedge a diseased shrub was dug out and replaced with a phyocarpus opulifolius diadolo.

This shrub is very hardy and gives good leaf colour, flowers and then berries later in the year. 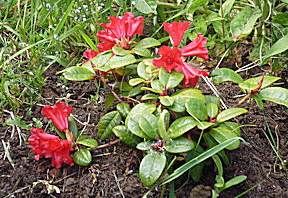 Along the fence that joins the Royal Mail Depot three rhododendrons planted  two years ago are begining to flower, here is a red one. The two dark  purple ones flower later, these plants were slow to establish.

Spring 2015 update:
The Garden in Spring 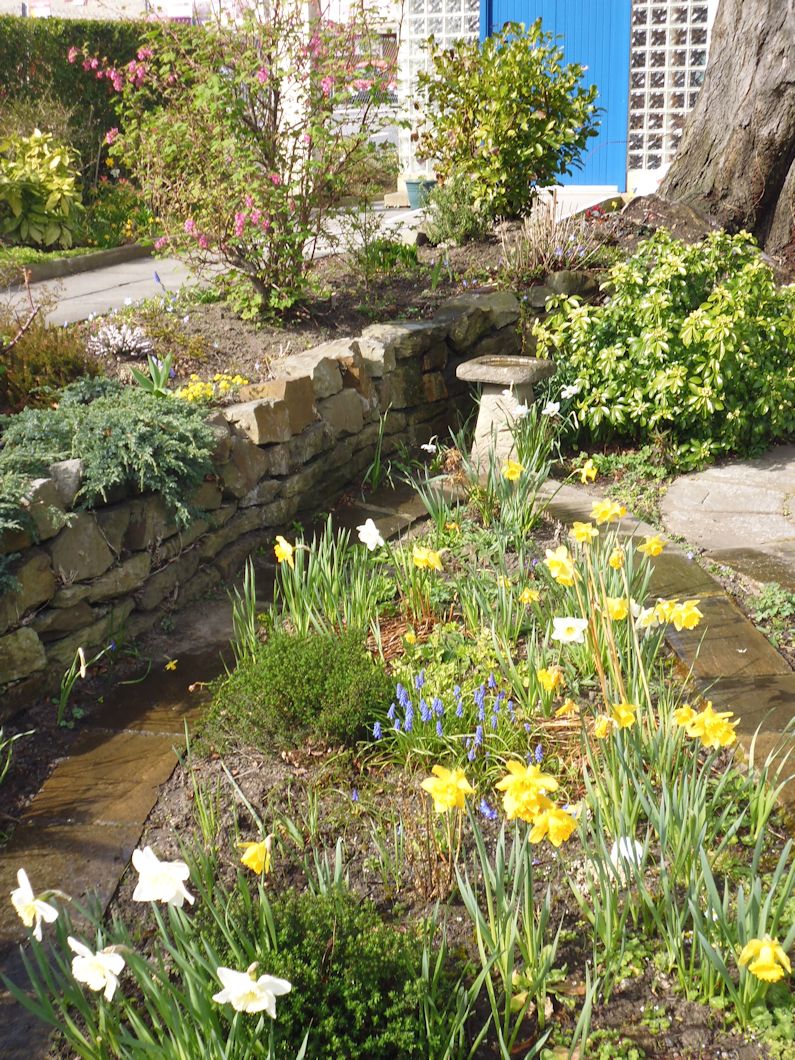 After a mild winter,  there has been little rain and with winds, the ground has become dry to  quite a depth. The lawn has not been mown for six weeks over April and  May. The grass has been very slow to start to grow, though moss,  dandelions and daises manage to be in abundance. We applied a treatment  of Feed and Weed to help the lawn recover, watering the area weekly. 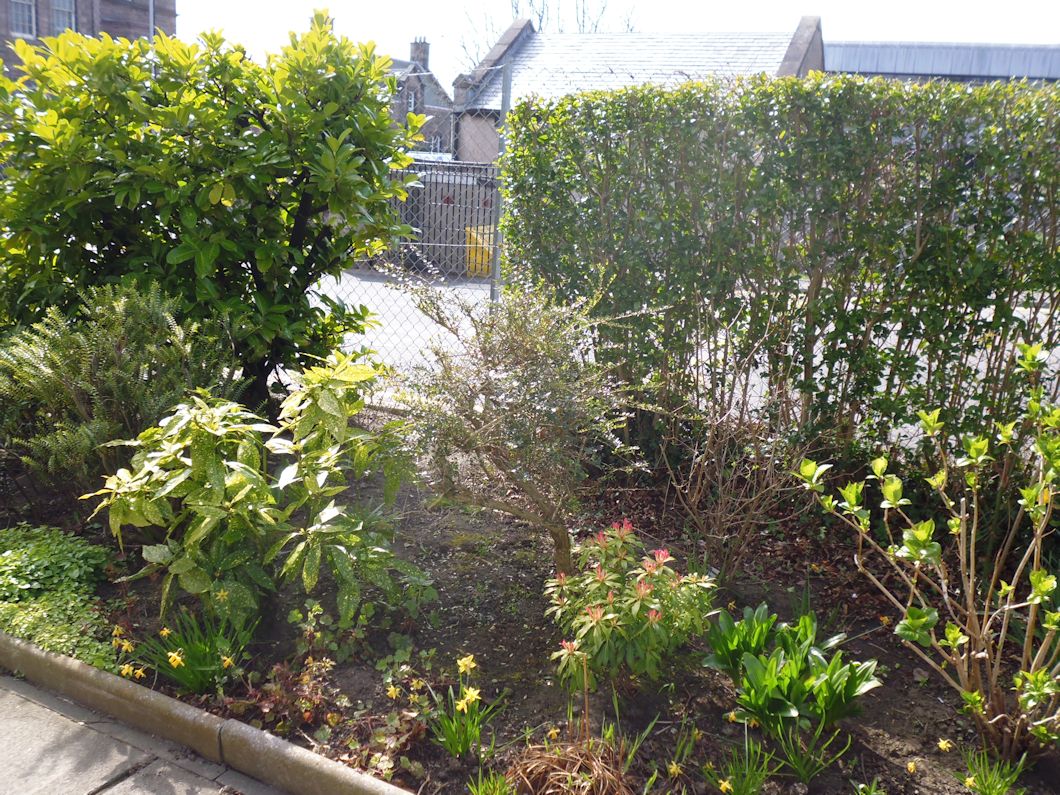 Shrubs and hedges have faired better and show new growth, bulbs have flowered but not for the usual long period.

Perennial weeds in the borders are much less, I am pleased to say.

Update to the garden at the end of the 2014 season

Since September our gardeners have gathered leaves and pruned shrubs as usual. 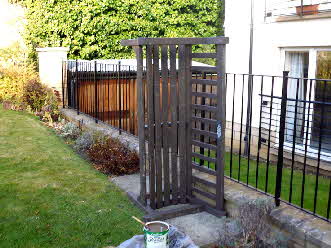 When the weather permitted benches have been sanded and repainted, a messy job but it keeps the wood in good order. 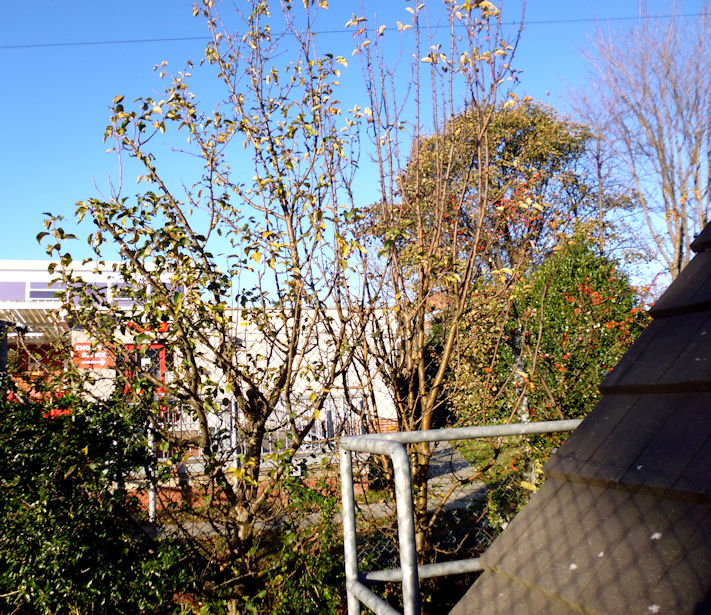 Along the top border at the back of the Hall, near the Royal Mail there is an apple tree. The variety is unknown, but it produces many unusual shaped  apples each year. The branches have grown very tall, and ungainly, these were pruned back recently. 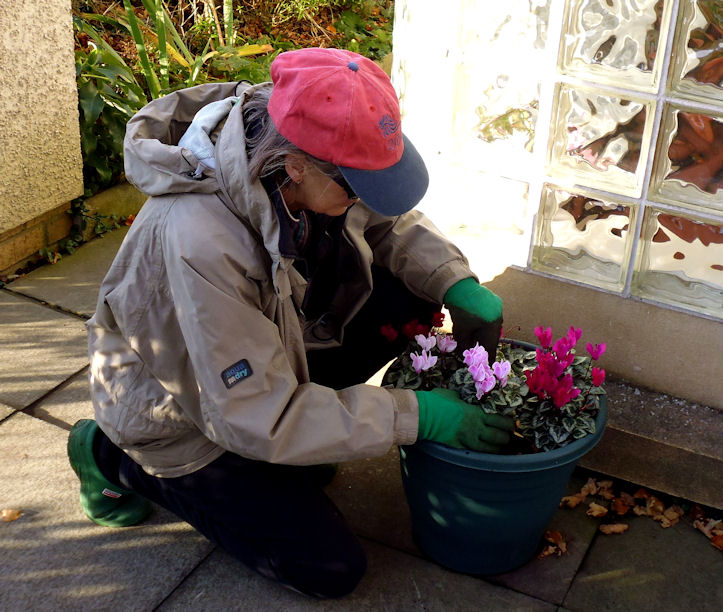 Alison planted cyclamen in the tub at the front door, to give colour for over the winter.

Update July 2014
Summer again has produced an abundance of flowers, but also weeds and unwanted growth of shrubs. Our volunteers have been kept very busy, clearing paths and borders of weeds.Some shrubs and perennial plants need their regular trim or division, to keep in order and spread of good plants. The ground has been dry for some time despite showers, we have had to use the hose to give extra moisture below the soil level for root growth. 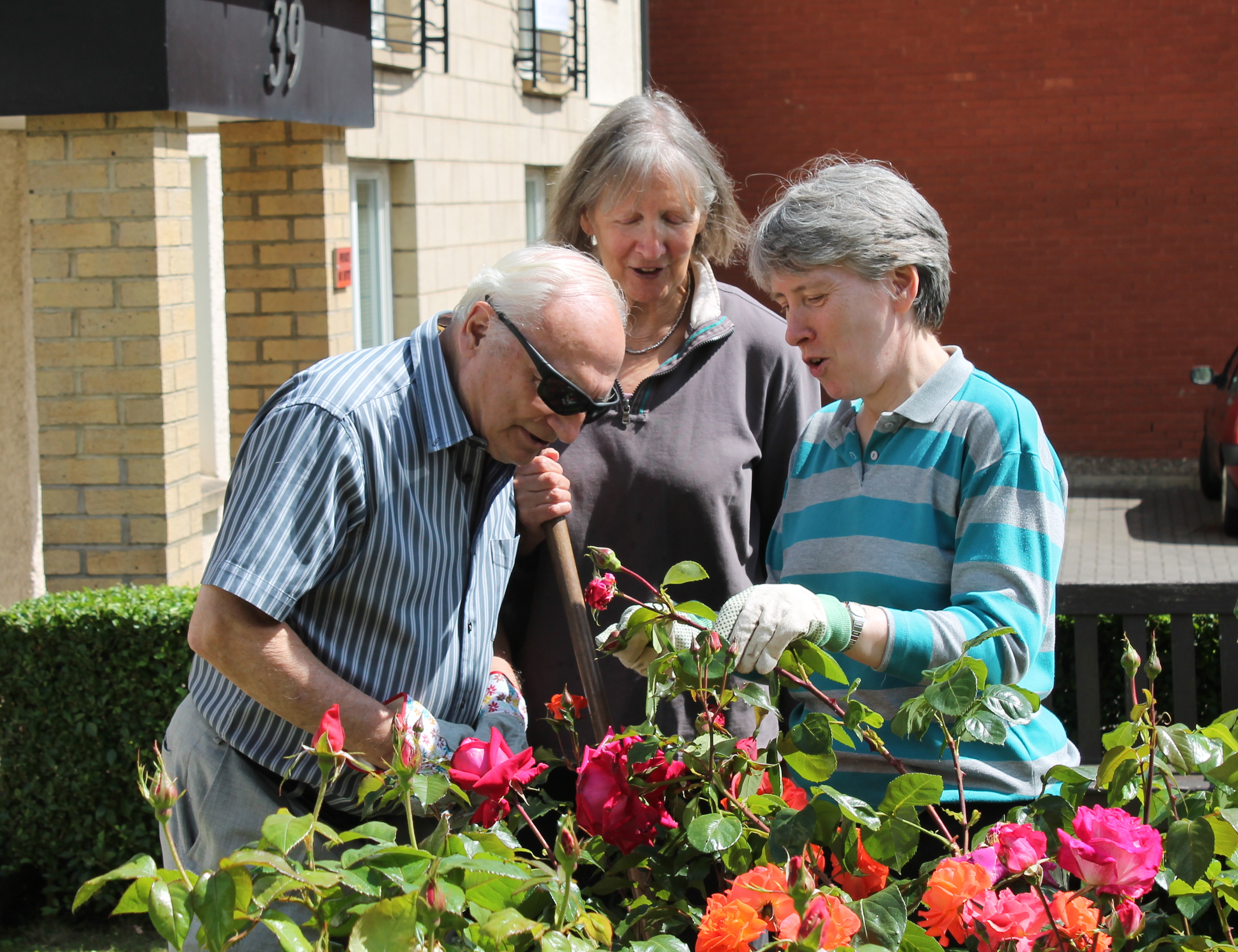 Saturday July 5th 10 -12 midday.
This morning for the first time we held a garden party, not the smart formal variety. The event was to allow members and guests to see work in progress and help if they wished. A warm sunny day encouraged many to visit, a lovely way to enjoy the garden and meet friends. Help to pick up hedge trimmings, dead head roses and water some borders was appreciated, home baking with tea or coffee was served later. 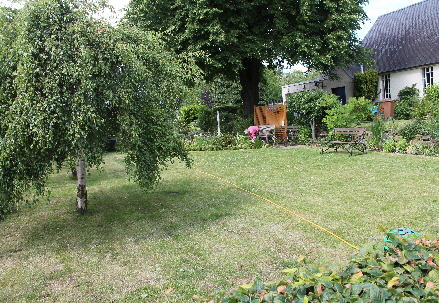 Flora Stevenson's Primary School, after school garden club, ran again during the summer term. This year some children from Primary 3,4 and 5  came to the garden with two teachers. They were shown how to plant seeds and plants while learning a little about a garden in general. The last day we had a picnic, much enjoyed by all of us.

Update 18 April 2013
Floras start the club next Wednesday again, 12 places offered for Pr 3 4 and 5.
Fred Mobeck (from St. Johns) visited a few months ago. He passes St. Ninian’s on his way home and has seen changes in our garden. Ex staff from the  Botanics he asked to look around. He kindly gave us some Solomon's seal, snowdrops, red campion, and a small perennial geranium, all surplus to  requirements in their garden. There was a major tidy up of some flower  beds where some plants were just too vigorous. From this new connection  the idea to see other gardens was formed:
City Centre Church Garden Visits :-
We have contacted the following churches: St Mary's Cathedral; Christ Church Morningside; St Peter's Lutton Place; The Good Shepherd; Holy Cross Davidsons Mains; St John's, Princes Street.
The garden group from each has been invited to visit us on Saturday 7th  September 10-30 to 12 where they can look around, then sit and share tea and biscuits in the Hall. There seems to be  much interest so we could be  busy.
There will be a Vestry Meeting in the Church that morning, so I would be glad to see as many of our group as possible not involved  with that to help me. Next year another Church would host a visit.
Two passion flowers have been planted at the trellis and a honeysuckle at the base of the apple tree.
Next Saturday session May 4th 10am  -12noon.

Our Gardeners’ Year
In the Winter months some shrubs and trees are pruned or reshaped, and  leaves are cleared from paths and lawns. This year The Memorial Garden  lawn had an extensive treatment to eradicate moss.
On the November  monthly session the pictures show Charles shaping the apple tree with  Janet and Maggie getting the trimmings ready for the compost bin. The third  picture shows Janet and Libby collecting leaves, from under the big  tree. All the roses have been pruned to half height, further pruning is  done in March. Weekly and monthly gardening sessions end with a hot  drink and biscuits

All are volunteers, we enjoy working together to keep the garden  colourful and tidy.  The front garden is available to the community,  useful when waiting for a bus or for children coming out of School, as well as a place for workers from the local business community to enjoy in their lunch break. We try to keep a good supply of foliage and some flowers, to help  Church flower arrangers. Do come and help - there is always something to do.
Maggie Moore is the current convener and the  person to contact. 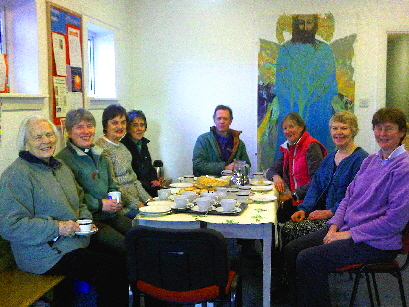 The Gardening Group  AGM, held in January is not a formal meeting,
but a chance to  discuss the past year and plans for the coming year with some festive  refreshments.

Gardening Sessions:
Weekly on Wednesday afternoons from 2 to 4pm
Monthly on Saturday mornings from 10am to 12noon on the first Saturday of the month.